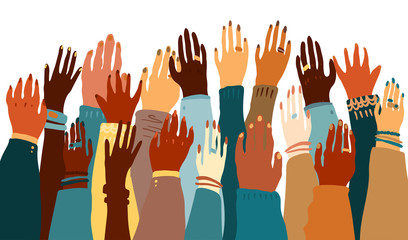 The recent political climate has shone a harsh light on the fact that there is an urgent need for society as a whole to be fairer and equal.

It is no longer enough not to be racist; we need to be anti-racist and that means that businesses have a responsibility to review policies and processes to ensure that unconscious bias is totally eliminated.

Diversity training and inclusion programmes are not working across the board. This is evidenced by the fact that black employees only hold 1.5% of management and leadership positions in the whole of the UK![1]

Bias in the recruitment process doesn’t always have to be linked to racism, sexism or meant to cause any other offence. It could simply be caused by an outdated recruitment advert. However, if businesses are going to be progressive and inclusive, they need to tackle this issue head on.

What is unconscious bias?

Unconscious bias occurs when people favour others who look like them and/or share their values. As an example; a person may be drawn to someone with a similar educational background, from the same area, or who is the same colour or ethnicity as them.

Everyone has unconscious bias; it is natural and unintentional.

In the workplace, unconscious bias can influence decisions in recruitment, promotion, performance management and idea generation and results in a less diverse workforce.

Talented employees can be overlooked in favour of a colleague who shares the same characteristics of views as their employer or manager.

Having a diverse workforce at all levels of the business is reported to make businesses more effective, more innovative and 43% more likely to make higher than average profits.

How do we remove unconscious bias from the recruitment process?

Simply being aware of unconscious bias will mean that decision makers should take more time on making important, people led decisions. As mentioned previously, unconscious bias is not usually done deliberately, it is engrained in human make up and this means a conscious effort is needed to be aware of situations where unconscious bias is having an influence. Training staff to explore these concepts is a great place to start. Some people might initially feel uncomfortable discussing their own unconscious biases but by exploring this with a diverse group can be very helpful and will make people think much more carefully about the decisions and actions they make in the future.

Whether we realise it or not, the language we use every day is inherently gendered and this easily filters into job descriptions. It might not seem like an issue on the surface however, studies show that it makes a significant difference to the type of applicant the advert will attract, and this is where the unconscious bias lies. For example: women were found to be less likely to apply for a job if the requirements in the advert included masculine driven words such as “driven,” “leader” or “dominant.” In contrast men were less likely to apply if the job description centred on interpersonal skills such as “support” “understanding” and “honest.”[2] Research also found that if the language an advert was more male or female dominant it was perceived that there were more males or females in these industries. It’s therefore important that recruiters make a conscious effort to remove gendered language from job descriptions and fortunately there are many apps and websites which can help with this process.

By removing traces of race, gender, sexuality and age from the screening process, it simply becomes based on merit and skills alone. There are lots of benefits to having a blind recruitment strategy, in addition to removing unconscious bias, it also widens the candidate pool because many people still avoid applying for certain jobs if they feel they might be negatively affected by unconscious bias. Publicly promoting the fact that the business has a blind recruitment policy is likely to encourage more people from minorities to apply for the role and employees also feel valued knowing they’ve been hired based purely on their skills and abilities. This recruitment strategy also helps to diversify the workforce bringing different mind frames and ideas to the business.

Recruitment technology and artificial intelligence are both proving to be effective tools for removing unconscious bias in the recruitment process.  There’s a huge amount of software on the market with a range of different benefits, from removing personal details such as names, gender, place of birth etc. from CV’s to support the blind recruitment strategy, programmes which develop skills assessment questions which help hiring teams focus on more job-relevant criteria about candidates well as automated scoring software to remove bias at this stage of the process. The most common applications of AI in the recruitment process include streamlining and automation for candidate sourcing, screening, and outreach.

In Germany, it is written in law that Boards of corporate firms must include employee representatives. This means that people of all minorities whether that be race, gender, sexuality or any other underrepresented group have a voice in the decision-making process. Whilst it is not law in the UK, much more effort is needed to diversify the workforce, particularly at a senior level. Similarly to having a diverse workforce, there are many benefits to having a senior leadership team. According to a recent McKinsey Analysis, gender-diverse companies are 15% more likely to outperform, whilst ethnically diverse companies are 35% more likely to outperform on their financial results.[3] Having a diverse team of decision makers means a business is a better position to understand the needs of both customers and staff making success and growth much more probable.

A diverse business starts with a diverse talent pipeline and if a business systematically advertises their roles in the same places, they’re likely to get the same type of candidate apply for the roles. Diversifying a recruitment and advertising campaign will help attract new talent. This can be done by using new job boards, embracing social media to make adverts more accessible paying careful consideration to the demographic targeting options that are available on social media advertising platforms.  Additionally, partnering with a diverse range of universities, particularly those with higher numbers of minorities is another way to tap into a more diverse talent pool.

Removing bias and having a more diverse and equal workforce is great for business, not just because of the performance related stats previously mentioned, but because it reinforces that a brand is ethical and has strong values. This alone will help to attract top talent across a diverse pool in the future.

What initiatives are you using to address unconscious bias to increase diversity?